Hi Handiquilter… nice to meet you.

I found myself alone in the studio today and I decided today would be the day that I got to know my longarm.  I suppose you would call it a midarm machine.   A year or so ago I picked up a used Handiquilter 16 from a friend of a friend who was desperate to get rid of it.  It was a very simple machine but did have a stitch regulator.  Seemed like a good idea at the time.  After all, I make a lot of quilts and this machine could significantly reduce the cost of pattern testing.

The machine had hardly been used… but sometimes that is just not good for a simple machine.  I spent about two weeks and about $300 getting to know the machine and fixing some neglected things.  Hardly enough time to really get to know it.  I had to immediately get back to work and travel to shows and events and was unable to really spend some quality time with the little guy.

Today… the studio was empty and I had a nice hot cup of coffee (it’s getting chilly around here)… so I put on my slippers and grabbed a quilt top in my ever growing stack of unfinished tops (this one actually doesn’t belong to me) and set about shaking hands and really getting to know the machine.

I knew from the few weeks I spent with it previously that I really didn’t like to follow patterns with that little red laser light.  I thought I would try some “doodle quilting” and just play.  It really doesn’t matter whether everything looks pretty and even as long as it is quilted.  The owner of this quilt top actually gave it to me to practice on.  She was going to use the quilt to practice making a scalloped edge binding… so the top had the pencil lines of the scallop and I used that as a border guideline. 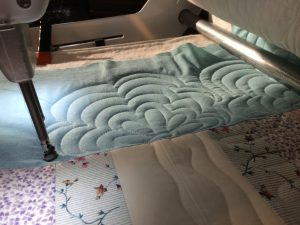 Here is a little of the border… you can see her pencil line in the upper left corner of the photo.  I decided to make a half flower design and echo quilt like a clamshell in her border.  That way she can trim around the line and not worry about messing up the design.  It was nice not to have to quilt all the way to the edge. 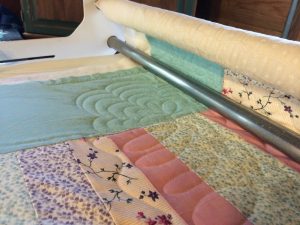 For the stripes in the center of the quilt I used lots of different designs.  Loops, swirls, squiggle lines… just a nice mixture of designs every couple of strips. 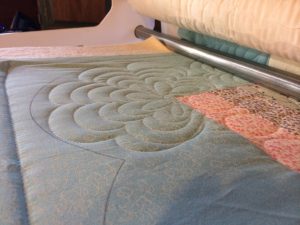 I echoed the border in the corners and surprisingly it came out really nice. 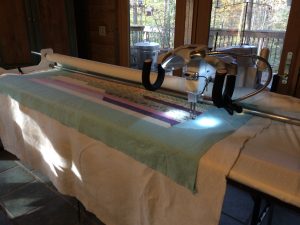 Before you know it I was almost complete with the top.  I couldn’t believe how much quicker the doodle quilting was… and it was really fun.  I got to practice and not worry about being perfect.  It was lots of fun. 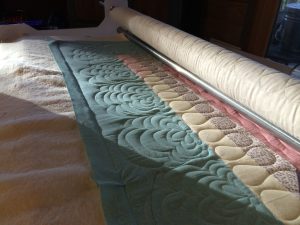 This was the final piece before I pulled it from the frame.  It took about 3 1/2 hours to quilt start to finish with lunch, coffee and a couple of phone calls in the middle.  What a nice way to spend a Monday at the Cabin.  I can’t wait to show the rest of the crew what I did when left alone.

The crew will probably blame it on the studio mice again.  Those pesky mice.

Filed under: General News, In The Studio, Machine Quilting