It occurred to me that my last post wasn’t really a WIP… since the pics I showed were of completed pieces.  They were works in progress for me… cause they have been sitting around too long.  Maybe I am the WIP.

But here is what’s on the design wall in the studio today. 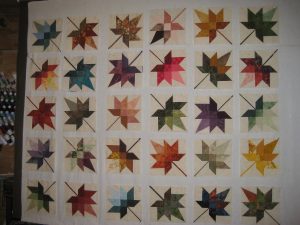 LEAVES!  It’s fall… and these have been around since Nov 2006 (so says my trusty Quilting Project Organizer. 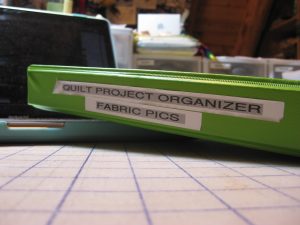 The plan is just to get the quilt completed.  This was group project planned by a few members of my local quilt guild.  It was a partially paper pieced design (stem and tip) somewhat loosely based on the pattern below called Leaf Symphony from Quiltmaker Magazine (Sept/Oct ’96). 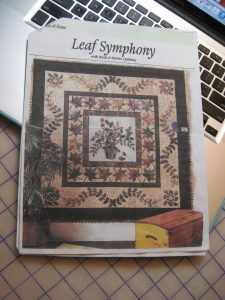 I have considered using the Accuquilt Go machine and my feathers cutting die to make a similar border as the one pictured.  But lets face it… it’s been sitting in a project box since Nov 2006.  In the throws of designing for two new books, do I really have time to make those feathers.  (If you have a great quick method idea of making those feathers… please let me know so I can impress myself and make the quilt that is actually in my head).

The border fabric is below.  It’s a dark teal with light teal and rust/orange hues.  I have wrestled with several prints… some more colorful that others.  This is the one I keep settling with as the final border print.  I have also wrestled with cutting many different shades/colors of sashing strips to put around all the blocks and using the border as cornerstones. 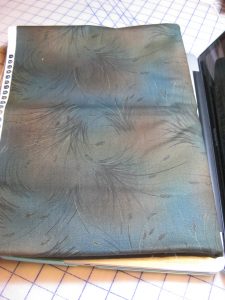 It’s on the wall… so hopefully I will at least make the sashing decision soon.  Keep your fingers crossed for me.  It has to come down by the end of the week… cause I have a little something that has got to go in it’s place.

What do you have to complete today?  Come by and share it with me.

Filed under: General News, In The Studio, WIP Wednesday