It’s TGFF and I am grateful that it stopped raining long enough that I could show you my most favorite completed project.  This is a sampler BOM that I purchased from a bargain bin the year that I first began quilting.  It has been lingering far too long (I think the binding actually took me 1 1/2 years to get on) and it is finally completed.

I even embroidered my name and date in the center of on of the blocks as my quilt label.

This pattern is called Women’s Voices by Fabric Expressions.  My LQS had placed the patterns in a discount bin along with the packs of fabrics that were unclaimed from a long overdue BOM and I grabbed them up.  The pattern shows template piecing methods so I had to digitally redraw all of the blocks so that I could rotary cut everything (which was a huge feat for a new quilter) but I was determined to finish it.  The blocks remained in a box in precut bags for a number of years and when I finally took it out to complete it I was a much better sewer and a few of the blocks had to be remade.

I love the way it turned out.  It was machine custom quilted by my friend Ginger Cook and I finally put the binding.  She did a beautiful feather in the border of the quilt.  Each of the blocks is quilted with a different pattern. 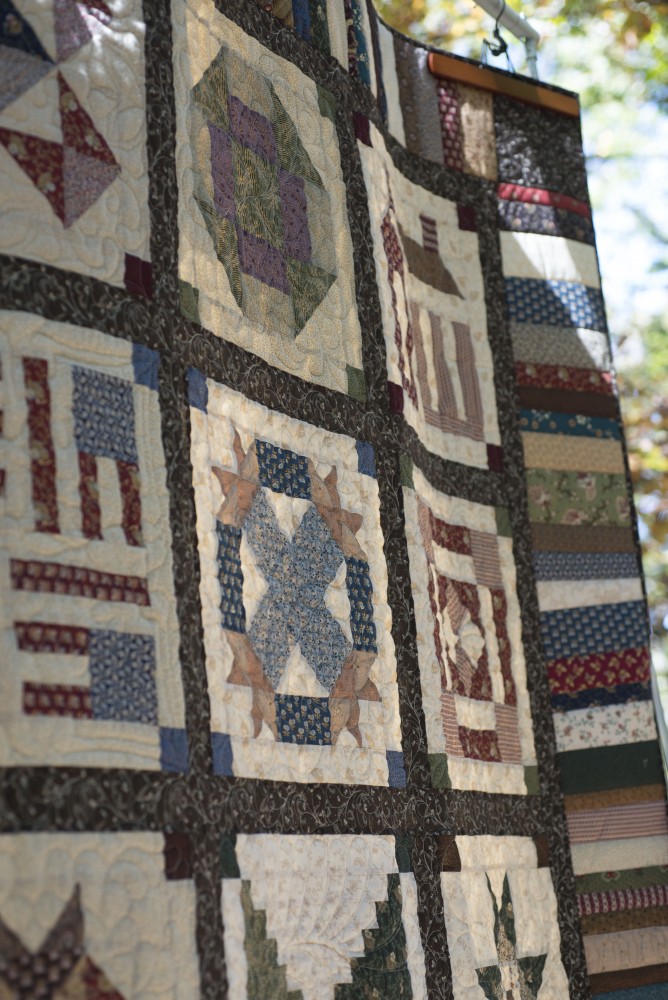 It took awhile to have a clear enough day for me to photograph it outside.  I did the best I could in the leaves.  But it turned out so beautiful that I just had to share.  It is my entry in the Blogger’s Quilt Festival this year hosted by Amy’s Creative Side.