All Scrapped Out! with the Keystone Quilters Part 2…

THE JOURNEY OF THE LEAST FAVORITE COLOR:

I love a good brown fabric.  I live in a log home with three sons and three dogs… so when I see brown (which shows a lot less dirt than light colors) I get really excited.  I long for a great dark and dusty civil war quilt and have a huge selection of this wonderful rich color.  But that’s me…

Brown is not everyone’s “signature color” and such was the case for this quilter.  Apparently her stash was seriously lacking in brown… and so what did she get as a gift?  BROWN!  She’s not a fan.  So when you are taking a class to use up scraps and stash… what better fabric to bring than your lovely gifted browns.

When I saw this block go up on the design wall… I shivered with envy… it looked so rich and had my name written all over it.  Imagine my surprise when I complimented this quilted on the beauty of her block and her response was “I hate brown.”  We all had to chuckle.  There were lots of bright and vibrant ladies in the room and I don’t think brown was their color either so I took a serious interest in this quilters journey with her least favorite color.  She used an 8″ 60˚ triangle template to cut her blocks so her quilt blocks were larger than my sample.  She wanted to do a completely different layout which is wonderful.  I watched her stare at this wall and wasn’t sure if she was trying to decide the layout of the quilt or trying to wrestle with her distaste for the color of it.  Probably a little of both.

It wasn’t long after that the second block went up on the wall.  Oooooo… Cream… but she was quick to inform me… nope… more brown.  The gears were turning.  How should I put the blocks together?  Should I mix them up?  Do I really like the way it looks?  Is it just the brown?  I wanted to hear her thoughts aloud… but she stood in relative silence… thinking.

Some time elapsed and I saw her pondering again.  More blocks were up and this time… the colors were mixed.  She stood still… pensive… thinking?  I wanted to yell out… IT LOOKS GORGEOUS!  I don’t think it would have done any good.  After all … she hates brown.  I don’t think she was gonna like it no matter what… and the rumblings began that when it was complete… it would be gifted back to those that felt the need to gift her the browns in the first place.  “Oh… they’ll get it back.”  Poor brown.  It’s so misunderstood.  If only there were flecks of teal or blue or something to make her love it… but there wasn’t.  Only brown.

Soon… the what if game began.  What if… they were laid out in a different pattern?  Would I like them more?  So the rearrangement began.  But as soon as one pattern emerged… it was quickly discarded for another one.  First they were arranged into diamonds.  Then the diamonds became pyramids.  But they were still brown…

This was the final picture that I took before the blocks were neatly packed away for the journey home. 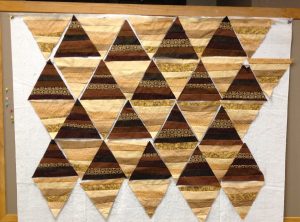 One final thought before cleaning up.